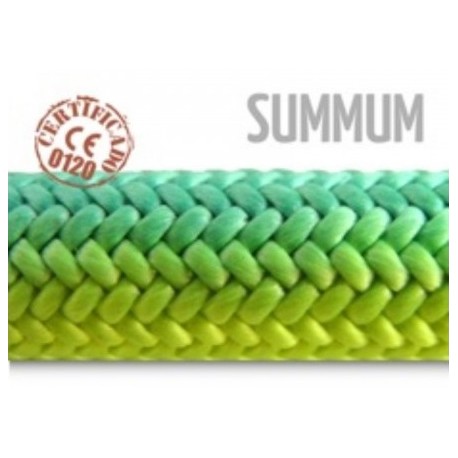 Notify me when available
Product features

The third generation of Korda’s ropes made with SUMMUM system. It includes the advantages of its precedent ropes DANA and FINA, being easy to handle and keeping its characteristics over time. It has a strong sheath to resist better the rubbings and the security that Titan System and Estability provide. It’s the only longitudinal bi-colour rope in the world.

Great resistance to friction with a much more abradable touch.

Pioneer system in the total union of the cover and the soul since 2002. All the parts of the rope work at the same time. Elimination of the unpleasant sock effect, slippage of the cover. Greater dimensional stability throughout its useful life. Reduces the progressive shrinkage of the rope over time.

It is much more than a finish, it is a novel patented rope manufacturing system. It confers important improvements and new benefits. Until now, the ropes that are used in the field of mountain and safety are basically built by 2 structures, the soul and the sheath. The TITAN SYSTEM incorporates a third structure consisting of a series of threads parallel to the axis of the rope, inside the structure of the cover, thus becoming a real armor. In a conventional rope, the threads of the sleeve describe a helical path, and all pass through the same side of the rope performing cycles of a few centimeters. Thus, if the rope suffers a significant damage on one side, all the threads of the cover are affected and this can tear. With this system, even if the case suffers a significant longitudinal damage it does not tear, as the TITAN armor avoids it.

Construction system of the third generation of Korda's. It unifies the already known ESTABILITY and TITAN SYSTEM, achieving a greater cohesion of soul-sheath and an even greater security, by combining the advantages of two different systems with proven experience. It is the maximum security that, to date, can be offered to users of technical ropes.